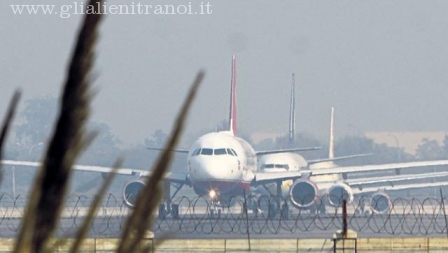 Security agencies guarding Delhi’s Indira Gandhi International (IGI) Airport have been put on high alert following the ‘regular spotting’ of suspicious flying objects in and around the airport.

On Friday morning, the Air Traffic Controller (ATC) at the Delhi airport observed flying objects thrice, in and around the airport.

Sources said the Indian Air Force even pressed a chopper into action to check the flying object. But the helicopter could not find anything.

On Tuesday too, the ATC had apparently noticed a flying object (a drone) over the runway, but had no visual evidence to support its claim.

The pilot of an Air Vistara flight from Bhubaneswar had complained of being distracted by a laser beam right while landing at IGI’s runway 29 on Wednesday night, putting the lives of hundreds of passengers at risk.

The pilot claimed that he was 6 nautical miles away from runway when he observed the laser beam, which distracted him.

The Delhi Police have prohibited the use of laser beams by any individual or group or organizers in areas around the airport under Section 144 of CrPC.

On Friday, the flying objects were first noticed by an air force officer.

“A member of Indian Air Force (IAF) sits at the ATC tower of Delhi airport. At 10:44am on Friday, he first noticed a flying object over runway 9-27, the smallest runway of Delhi airport. He reported two more objects at 10:50am and 10:55am, flying outside the airport boundary. On Tuesday, an ATC staff had claimed of having spotted a drone-like object but could not support his claim with any evidence. This time also, we do not have any evidence. But this is alarming,” said an airport official. 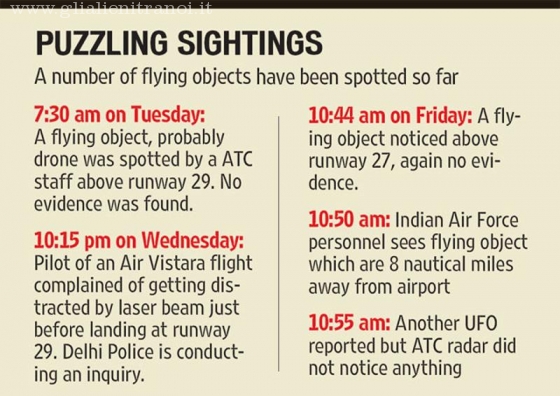 Sources said that a meeting of Intelligence Bureau, Central Industrial Security Force (CISF), Bureau for Civil Aviation Security and Delhi Police had been conducted and the Indian Air Force (IAF) had been asked to keep a strict watch on aerial threats. Sources said that the IAF has been authorised to shoot down any suspicious objects if need be. The CISF, which is responsible for the security of airport, have been asked to keep a watch on the air side.

“Even the ATC radar couldn’t capture anything on Tuesday. On Friday, some staff claimed that the radar had captured a flying object. But later we found no evidence. No one is sure as to what is happening. But we have put everyone on alert as we do not want to take any risks, especially with the VIP movements due to the India-Africa Forum Summit,” the official added.

Sources claimed that the suspicious flying objects on Friday were 8 nautical miles away from the airport.