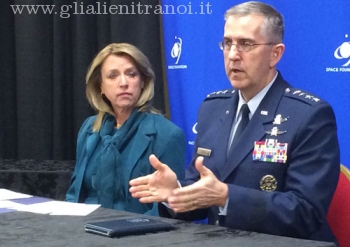 COLORADO SPRINGS, Colo. — The Air Force is making preparations for a conflict on Earth that escalates into space, senior leaders said April 15.

Space systems are facing “advanced demonstrated and evolving threats,” Deborah Lee James, secretary of the Air Force, said at the Space Symposium. There is a potential for “hostile actors” in the domain and the service must “have a new mindset when it comes to space,” she added.

“The Chinese have continued to test [anti-satellite weapons] since the year 2007,” she said in a speech. That was when it destroyed one of its own defunct spacecraft with an anti-satellite missile and left a debris field with some 3,000 pieces that will remain in orbit for years to come.

“There have been additional tests that didn’t destroy a satellite since that time. The testing has continued so that is an ongoing concern, something that we are watching,” she told reporters later. Russia is also a cause for concern, she added.

“We need to be ready. We must prepare for the potentiality of conflict that might extend from Earth one day into space,” she said.

Last year, the Defense Department conducted a strategic review of the space portfolio. One conclusion was that current space systems were designed in an era when space was not contested or congested. “This is no longer the case,” James said.

“We need to ensure that our mission can get done despite what could be a very challenging environment in space to include challenges of one day having warfare effects in space,” James said. “We must not let potential adversaries ever deny us the use of space.”

The review also concluded that the Air Force must improve its space situational awareness. “Knowledge is power and we need ever improved eyes in the sky,” she said.

“We will invest in our training, doctrine and tactics,” she said. U.S. Strategic Command is creating the joint space doctrine and tactics forum to address this.  “There will be investments in modeling and simulation, training and operational exercises.”

“If we have any non-space people in the audience, people who are involved in other aspects of the military, you’re probably thinking, ‘modeling and sim? Training. Exercises. This is what we do in every part of the military.’ And you’re right. It is. We need to do this now increasingly in space.”

This will be a substantial culture change, which can be the most difficult aspect to alter in the military, James said. “But we have to stick with it.”

Further, the Air Force is investing in defense capabilities such as detecting satellite jamming and pinpointing where it is coming from. It is also important to boost space situational awareness, she added.

Two geosynchronous space situational awareness program vehicles, better known as G-SSAP, launched in July 2014. They are observing satellites in geosynchronous orbit and look for unusual activity. They have the ability to maneuver around to investigate other satellites. “We think of this as our Neighborhood Watch program,” she said. The space fence, a ground-based radar system that can detect spacecraft and debris, should be completed by 2019, she added.

Air Force Space Command Commander Gen. John Hyten said during a press conference, “We have a responsibility to defend against all threats. That’s what our job is. … There is no doubt we have seen threats appear in the last decade, and we have to be prepared to respond to those threats. It’s that simple.”

Less than one year after China demonstrated its ability to destroy a satellite in low-Earth orbit, the U.S. Navy shot down an errant National Reconnaissance Office satellite that was going to de-orbit. The government denied that it was a response to the Chinese test.

“We will not get bested in space,” Hyten said.