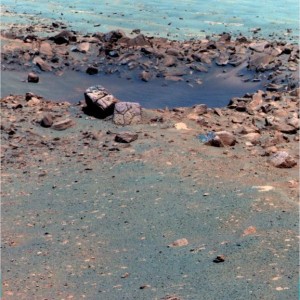 Today while looking at the high volume PhotoJournal library at the Jet Propulsion Library California Institute of Technology today I found a very interesting Mars Exploration Rover (MER) photo. It is classified as image PIA12452.

It clearly shows what appears as a small pool in the foreground with a lake in the background with waves coming in.

Here is the caption JPL / NASA provided (unedited) for this photo:

“This false-color image shows the rock “Chocolate Hills,” perched on the rim of the 10-meter (33-foot) wide “Concepcion” crater.

This rock has a thick, dark-colored coating that is interesting to scientists because many of the rocks in the surrounding area have the same mysterious dark stuff. The coating could be remnants of a layer that was changed by the action of water and weather or, it could be a layer of rock that melted when a meteor (less than a foot across) impacted Mars, ejecting this rock and others and creating the crater “Concepcion.” Knowing its origins will help them understand the history of Mars. Opportunity’s mission is to figure out the “ingredients” of this morsel by studying the chemicals in it. Patches of unusual dark material can be seen on top of this rock and on several others in the scene.

The false-color enhancement increases the contrast between different rock and soil types on the Martian surface.” 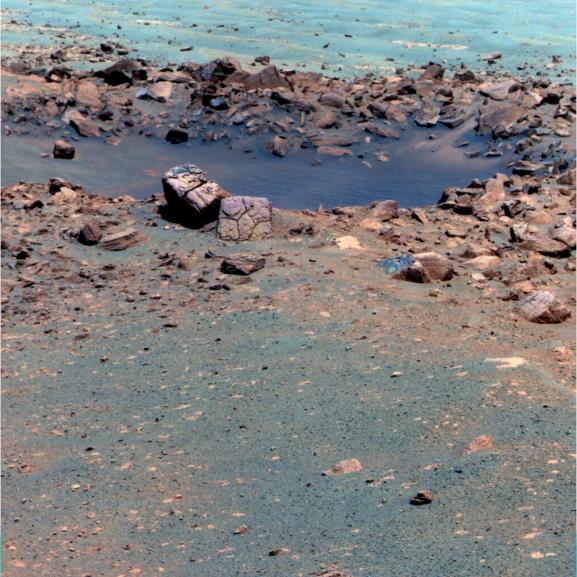 NOTE: NOT A SINGLE WORD ABOUT THE LAKE OR  POOL RIGHT BEHIND THE “CHOCOLATE HILLS” FORMATION

The picture by their own admission has been filtered by 3 different camera filters: 750, 530 and 430 nanometers. Scientific analysis of light indicates that different frequencies/wavelengths of light (electromagnetic radiation/ER) produce different colors in the visible spectrum. Wavelengths within the range of 450- 495 nanometers produces blue. Red light is electromagnetic radiation with wavelengths in the 620-750 nm range. The visible light range of the human eye is approximately 380-700 nm.

All these filters did was normalize the photo and remove the red tint and blurring blue wavelengths of light. That is why the usual reddish hue is missing. One would ask if you can get such crystal clear normalized photos of the Martian surface why do we always see the red washed out imagery?

The camera filters would have not done anything to obscure or enhance what appears to be liquid dynamics in the pool or the lake water formation. You can see the texture of the waves with its white caps as clear as any picture taken here on earth at the beach.

Here is a screen capture of the webpage in case it gets taken down: 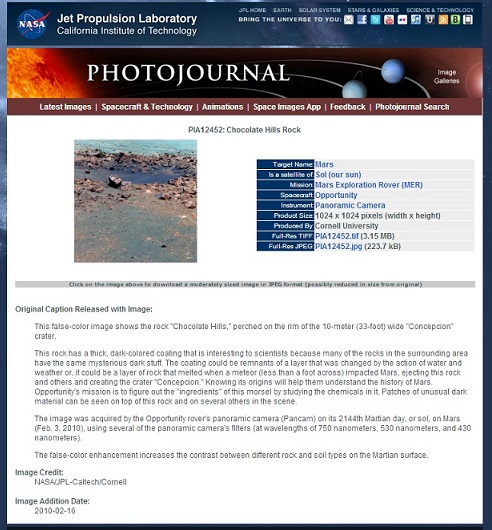 If you search for “water on mars” you will get thousands of results reporting that water once did exist on Mars in its ancient past. 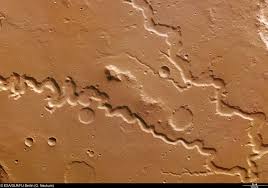 For example here on Wikipedia – Water on Mars you will see the usual high orbital photographs of ancient lake beds, dried up rivers and the like. Many photos exist of what appears to be remnants of water flow, sedimentation, and tell tale signs of liquid erosion patterns.

But obviously that is NOT the whole story..

If you think about it for just a moment it has to be liquid water we are seeing in PIA12452. Reason being that if another form of liquid such as a methane, fluorocarbons, or any other exotic liquids existed on the surface of Mars, the scientists would have attributed the existence of all the other photographic evidence to it. There would be no conversation or speculation as they would know what caused the artefacts.

Water is the only suspect.

Please download the high resolution image of PIA12452 and spread it far and wide. Share this all over social media, tell your friends.

Most importantly research my claims in this article and do not trust anything I say. Go to the JPL PhotoJournal and see for yourself and judge for yourself.

“Where there’s water on Earth, you find life as we know it. So if you find water somewhere else, it becomes a remarkable draw to look closer to see if life of any kind is there, even if it’s bacterial, which would be extraordinary for the field of biology.” ~ Neil deGrasse Tyson

Only by education and diligence can we turn the tides on this long running cover-up. It is time the truth be told.