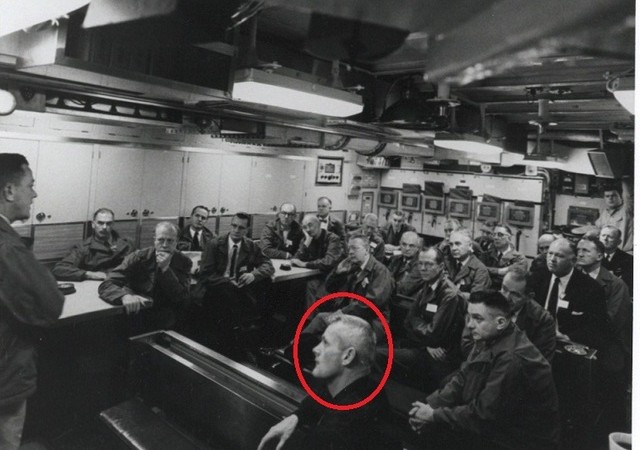 The man in front is said to be Valiant Thor, a benevolent alien from Venus who worked with the U.S. government. The photo was presented by Phil Schneider, who said he met the alien while working on secret government operations, at the 1995 Preparedness Expo.

His name is Valiant Thor; he looks human, but he has some key physiological differences. He is from Venus. He worked for the U.S. government for some time in the 1950s before leaving in his spaceship.

This is the story told by the late Phil Schneider, a geologist and engineer who said he had level-1 security clearance in secret government projects. He helped build underground military bases and worked at the famed Area 51 base.

Schneider said he met Thor, and he’s not the only one to make such a claim. Dr. Frank Stranges wrote a book titled “Stranger at the Pentagon,”about his alleged meeting with Thor.

Schneider showed a picture of  Thor during a lecture at the 1995 Preparedness Expo. The photo was taken in 1943. Schneider said the alien had been working for the U.S. military since 1937. Thor had six fingers on each hand, an oversized heart, one giant lung, copper oxide blood like an octopus, an IQ off the scale (could be estimated as 1200), and could speak 100 languages fluently (including alien languages). He also said his lifespan is 490 years.

According to Dr. Stranges, Thor was about 6 feet tall and 185 pounds with brown, wavy hair and brown eyes. Dr. Stranges said President Dwight Eisenhower and Richard Nixon both met Thor.

Timothy Good, a former U.S. Government consultant who has been vocal about his knowledge of aliens, also said Eisenhower met aliens.

Thor left Earth on the morning of March 16, 1960, according to Dr. Stranges. He left in a spaceship from Alexandria, Va.