An independent group of researchers in Puerto Rico believe that they made contact with aliens, “beings from elsewhere.” On the 37th anniversary of the mysterious “WOW! Signal,” this incident they stated, had occurred. 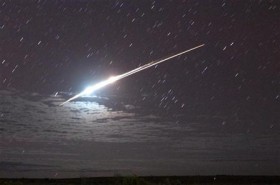 In 1977, in the Search for Extra Terrestrial Intelligence (SETI), Joshua P. Warren’s team recorded a message and sent it to space from Puerto Rico and several other places on Earth. The message for an invitation of contact was sent into space in the SETI project and was recorded by George Noory, host of “Coast to Coast AM,” the largest overnight radio program in North America. What they then found was a remarkable discovery in the search for alien life; there was a sudden burst of radio waves that astronomer Jerry Ehman detected. He too was working on the SETI project. Ehman wrote on the computer printout margin: “WOW” and the name “WOW Signal!” was born.

After 37 years, researchers say that the same signal was detected again, and they believe that a UFO may have sent the signal.

Joshua P. Warren, head of the “Arecibo Project” and Director of the Bermuda Triangle Research Base, said, “We believe the UFO may have sent us the same type of signal that came from space, and was recorded by SETI, 37 years ago.” They had sent a message of contact into space for a whole day from Arecibo, Lajas, and other parts of the island, after which the signals were recorded.

He said what was surprising was the fact that it was picked up by a webcam microphone and not even a broad dish like SETI. “Our analysis thus far has shown it is essentially a demodulated signal from the WOW! Transmission turned into audio,” he said.

A “saucer-shaped object” had also been seen that went straight up in the sky with a high pitch tone. The footage is being analysed in Washington DC at the studio of filmmaker C. Eric Scott and the audio is being processed in North Carolina.

Warrens said, “After my 7 years of research here, the accumulating evidence suggests we may be dealing with a new form of life in Puerto Rico. Sometimes huge, and sometimes small drones, I believe these beings could be a highly-advanced, extremely sleek and efficient organic/electronic hybrid.”

He said that they have probably evolved much longer than humans, and are now capable of inter-stellar and inter-dimensional travel, seeming to pop in and out of our visible dimensions almost instantly.

He also stated that the beings may be sensitive to human thought and often engage with highly focused human beings. “We don’t know their ultimate agenda, but if it were detrimental to humans, we’d likely have been harmed by now,” he said.