Air force chief Rodzali Daud said authorities were investigating an unidentified flying object about 320 kilometres north-west of the Malaysian state of Penang at 2:15am on Saturday.

That is hundreds of kilometres to the west of the plane’s planned flight path between Kuala Lumpur and Beijing.

Authorities have said radar data records indicated the “possibility” that the plane may have attempted to “turn back” to Kuala Lumpur shortly before its disappearance, but have not revealed the specifics of the data.

“We are corroborating this. We are not saying this is MH370. It’s an unidentified plot,” General Rodzali said. 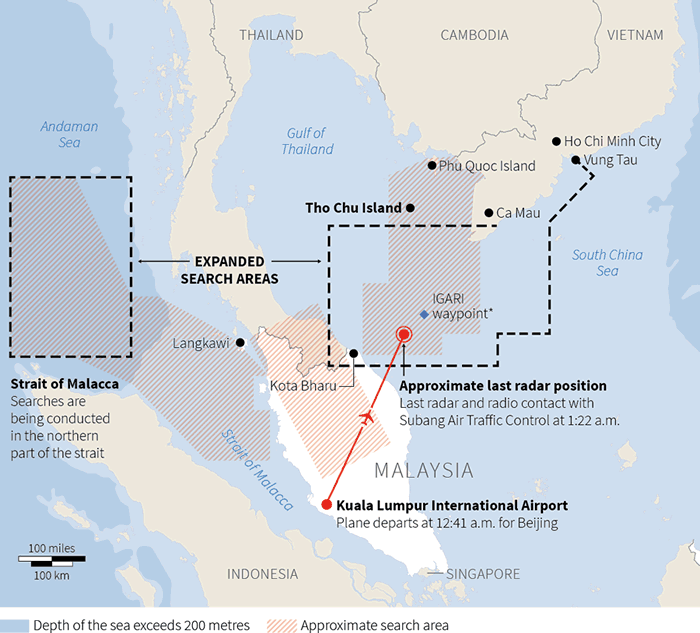 Infographic: Authorities have widened the search area for missing Malaysia Airlines flight MH370, which disappeared with 239 people on board. (Reuters)

According to the data cited by General Rodzali, if the radar had spotted the missing plane, the aircraft would have flown for 45 minutes and dropped only about 1,500 metres in altitude since its sighting on civilian radar in the Gulf of Thailand.

There was no word on which direction it was then headed, but if this sighting was correct, the plane would have turned sharply west from its original course, travelling hundreds of kilometres over the Malay Peninsula from the Gulf of Thailand to the Andaman Sea.

This would put it in the northern part of the Strait of Malacca, roughly south of Phuket and east of the tip of Indonesia’s Aceh province and India’s Nicobar island chain.

Indonesia and Thailand have said their militaries detected no sign of any unusual aircraft in their airspace.

The US National Transportation Safety Board said in a statement that its experts in air traffic control and radar who travelled to Kuala Lumpur over the weekend were giving the Malaysians technical help in the search.

A US official in Washington said the experts were shown two sets of radar records, military and civilian, and they both appeared to show the plane turning to the west and across the Malay Peninsula.

But the official stressed the records were raw data returns that were not definitive.[fonte]